“Physical fitness is the first requisite of happiness. Our interpretation of physical fitness is the attainment and maintenance of a uniformly developed body with a sound mind fully capable of naturally, easily, and satisfactorily performing our many and varied daily tasks with spontaneous zest and pleasure.” 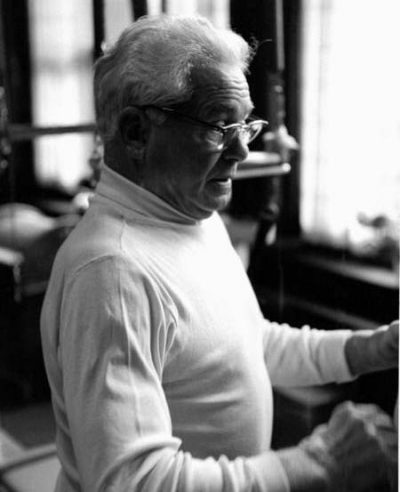 oseph Hubertus Pilates was born in 1883 in Moenchengladbach, Germany. His childhood was characterized by the poor circumstances he and his siblings experienced growing up in the industrial part of Germany. He liked to be by himself, going out into nature and observing animal movements. Later, he got an old anatomy book and started studying human anatomy with great interest.

Influenced by the German gymnastics movement, and probably the famous gymnastics educator “Turnvater Jahn” he started to develop exercises in order to improve his boxing technique.

In 1914 he traveled to England together with his brother, most likely to further develop his boxing career. When World War I broke out, all German men living in England were brought to a prison camp on the Isle of Man. He spent 5 years of his life here. This experience, undoubtedly, influenced his personality, his work ethic, and his love for movement. However, not much is known about his time in the camp because he didn’t really talk about it afterwards.

After the war, he trained the Military police in Hamburg, Germany before deciding to move to New York. Together with his wife Clara, he opened the first Pilates studio in 1926. Throughout his life, Joseph Pilates worked on his exercise regiment, which he called “Contrology.” However, pretty soon his clients simply called it “Pilates.” He invented every apparatus that is still in use all over the world. For over 50 years, he tried, changed and reinvented the equipment and his method until he had perfected them.

Back in the day, many famous dancers worked with Joe, but not only dancers–everybody was welcome in his studio. He even had a special treatment area behind a curtain, where he would work with clients that suffered from various injuries.

Later in life he was known for being a good sportsman, liking not just boxing but also skiing and running. He went for a run in Manhattan every morning, undeterred by any weather conditions.

After his death in 1967, his wife Clara continued teaching the method of Contrology, together with his protege, Romana Krysanowska. When Clara Pilates retired, Romana took over and was devoted to the method–now officially known as Pilates–until her death in 2013.

WHAT OTHERS ARE SAYING ABOUT PILATES & HORSES STUDIO

“Rebekka’s keenly trained eye can see your strengths and weaknesses, allowing her to focus your training on where it’s most needed at the time. And since your body is always changing, your training and her teaching is as well. Rebekka’s focus on proper form will take your practice to a level you didn’t know existed! Your movements will become smaller, more precise, and very challenging! After practicing Pilates for more than 20 years, I am humbled by how hard the work can be, and amazed at how my body learns and adapts. I have never felt stronger and I owe it all to Rebekka.”

“Rebekka is not just a Master Pilates instructor she also practices and applies it to every aspect of her life which she shares with her students. I can without a doubt say that without my weekly sessions with Rebekka in the beautiful Studio, using Gratz equipment, I would not be as strong, confident or as conscientious about my posture in everything I do. Pilates has given me a renewed view of my body inside and out. Every BODY needs to incorporate this proven method of working out for now and as we age.”

“Rebekka Schulze is Joseph Pilates reincarnated and you will know it if you find yourself fortunate enough to be working under her guidance. A much deeper learning from Rebekka than tightening the abdominals. You will elongate, slim, and strengthen. You will slenderize and get long & strong very quickly 5 sessions will be transforming. 10 sessions begins the healing. 20 sessions changes your life. Then? You go deeper.

“My Pilates career began in 2013 with Rebekka Schulze. As my mentor she has given me the gift and knowledge of Pilates that I will carry with me the rest of my life. I believe my training with Rebekka has been life changing and has given me the taste and drive to learn even more about the human body and how Pilates transforms mind, spirit and body.

Rebekka’s knowledge of the human body, the history and meaning of Pilates as well as her love for teaching makes her the best and very sought after instructor and trainer. I feel very fortunate to have worked with Rebekka for the last several years.I strive to be an instructor and trainer that Rebekka is proud to say she mentored and I feel a great responsibility to share ‘the work” as authentically as I can.”

I love training Pilates with Rebekka. As a Pilates teacher myself, I know and love the work. Rebekka has challenged me to try things I didn’t think I could ever do. I always leave her studio standing taller and feeling refreshed. She has taken my own teaching to another level and is a knowledgeable and reliable mentor.

“I thought I knew what Pilates was about, but Rebekka has a way of making even advanced students feel like beginners. In her teacher training program, I not only learned the exercises themselves, but also how to draw more out of my clients.She’s the perfect person to learn from: always kind and generous, but also exact and exacting, cultivating trainees who maintain the same level of excellence she does. I’ve never learned more from any other instructor and it is a privilege to continue studying from her.”

“After many years of adventure racing, mountain biking and trail running, I developed bad form which lead to a hip issue that I’ve had for 5+ years. After trying many different failed approaches, I stumbled upon Pilates and was subsequently introduced to Rebekka. Rebekka is a graduate of the ‘The Work’ and studied under Pilates Elder, Jay Grimes. At first that meant nothing to me, but the more I work with her and educate myself in Pilates, the more I understood the importance of her education and experience and how hard it is to reach that level. And since she’s a physical therapist it only adds to her knowledge and experience.

All along I knew the importance of strong abs but I didn’t realize that it’s the core that is the powerhouse of the body. Having a strong core improves balance, posture, mobility and overall athletic strength. I’ve found that Pilates is the best way to gain that core strength and flexibility. A lot of progress has been made over the past few months I’ve seen her. I am now so confident in my physical abilities that I have planned a 3 week trip to Nepal: backpacking and sightseeing. If you want to do it right and get results, go see Rebekka!”

“Rebekka is a fantastic trainer, whose understanding of the body and the classical pilates work is exceptional. Although I was unsure how well lessons via Skype would work, I have found her ability to clearly verbalize all cues and her attention to detail to be a great match to this channel. In less than 30 sessions I have seen a lot of changes in my body and have really deepened my understanding of The Work.”

“I was blessed to meet Rebekka at an equine positive reinforcement clinic several years ago and reconnected during the pandemic in virtual clinics online, where her infectious enthusiasm for Classical Pilates sparked my interest. After several months of lessons, my comfort both in the saddle and on the ground has improved dramatically. I am finally learning how to use and strengthen my body properly and, most importantly, how to correct my own imbalances. This not only makes riding safer and more fun for me, but is so much easier on my horses since I can balance and use my body more effectively. Rebekka’s constructional training approach breaks down every little nuance of an exercise and slowly builds on each step so that you get the most out of Josef Pilates’ phenomenal method in a fun and rewarding way. When you take the lessons into your daily life and into whatever sport you enjoy, you will experience the proof of this work.”

I had done Pilates for many years before I met Rebekka and I really enjoyed it as an amazing work out. Rebekka brought Pilates alive for me. After working with Rebekka I truly understood what Pilates is and how it can make you feel. She constantly challenges me physically and intellectually as I push my body, learn new exercises and how they relate to every other exercise. Rebekka is a teacher’s teacher, I love sharing what I discover with her with my own clients.